People rely on their builders and tradespeople to know about Asbestos building materials.
If a tradesperson is at all uncertain they must gain further advice and testing from a company like www.hazmat.co.nz .

There are various Asbestos Awareness courses which form part of the certificate in construction site safety for tradespeople, it is getting harder and harder to find an excuse for missing obvious known materials such as vinyls, super 6 roofing, super 6 fencing, decramastic tile roofs, pipe lagging, fletchers board or in this case James hardieboard.

In a case recently HazMat was called in at the end –  after the damage was done.

A builder was called in to quote to replace a dilapidated shed cladding that was clad in hardieboard circa 1970’s. The builder quoted for the job and explained that it was not Asbestos to the homeowner. How they knew was anyone’s guess as it was never tested.

After the job was complete a friend of the homeowner took a piece of the hardieboard that was left lying on the ground (which there was plenty) to be tested for Asbestos.

Numerous pieces of Hardieboard and debris left lying around the site 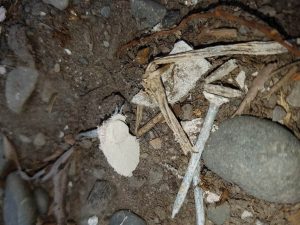 The Asbestos test which turned out to be positive for chrystotile Asbestos, which is common in hardieboard around this era.
The new cladding was up, the job was “90% done” however all of the staff working for the builder, the homeowner, neighbours, visitors etc had subsequently been exposed to asbestos dust.

The removal was done poorly and long reaching as there was personal items stored in the shed, washing was hanging nearby and pieces of hardieboard were found up to 4.2m away from where the shed was located which suggests that the asbestos dust in the removal could have carried for vast distance.

Chunks of Asbestos Hardieboard found in grass 4200mm from shed. 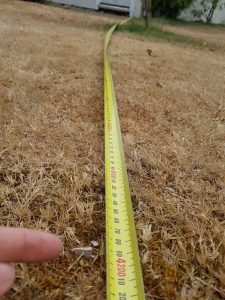 In addition there was pieces of Hardiboard and dust left in the shed itself which had been frequented throughout by the homeowner and also used to store personal items.

Asbestos Dust left inside the Shed 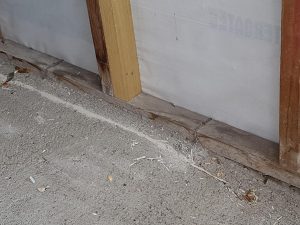 Worksafe was notified by the friend and a stopwork order was issued by worksafe – This was when HazMat came on the scene.
Once the Notification Of Licensed Asbestos Removal was submitted to Worksafe from HazMat , we went about clearing and cleaning a vast area safely. at the conclusion of the cleanup we were able to gain a third party asbestos assessor clearance certificate (for a cleanup job well done by HazMat) and amongst other things were able to remediate some personal belongings and dispose of safely those which could not be remediated.

The cost of this cleanup was far in excess of what it might have been had HazMat had been called in to do the job in the first instance….lesson learnt by the builder but further consequences may be looked into for the building company by worksafe.

In the first instance if unsure of the material call a qualified and licensed asbestos company to perform all Asbestos testing, removal & remediation like HazMat.