Donna Somervail and Richard Goodwin’s home in Kaiapoi, north of Christchurch, is being repaired and decontaminated after water blasters and burglars spread asbestos.

A Kaiapoi couple want help finding the mystery contractors who were exposed to asbestos and contaminated their home and possessions after working at the wrong house.

Donna Somervail and Richard Goodwin came home on April 10 to find the gravel coating from their decramastic-type tiled roof had been water blasted, spreading asbestos-laden sludge all over the Canterbury property. A neighbour said contractors had started water blasting, presumably after going to the wrong house, then left.

Tests revealed the house and contents were also contaminated through partly-open windows.

“They left an enormous mess,” Somervail said of the contractors. “And they have been exposed to a really nasty form of asbestos.”

The couple had to pack a suitcase and leave as soon as the contamination was discovered, and put Goblin the cat into a cattery while they moved into a temporary home. Before their belongings could be decontaminated and packed up, burglars broke into the cordoned-off house twice, stealing valuable items and spreading the asbestos further.

Somervail and Goodwin are still out of their house. They do not know what possessions they have lost to the contamination and the burglaries, as what could be salvaged has been packed into storage.

Their insurer is meeting the cost of decontaminating their house and replacing the wrecked roof – work which is holding up earthquake repairs they have been struggling to get done.

But they would not be covered for other costs, including replacing their garden which has been “trashed”, Somervail said.

They now want to find the water blasting company responsible, hoping the firm’s own insurance coverage will help them out. Efforts by their insurance company, local council and police to find the company have come to nothing. 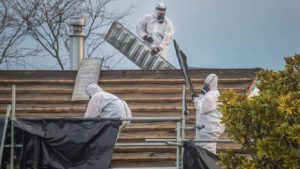 “We were told not to investigate. But it seems these contractors don’t want to be to be found,” she said.

The couple hope someone who had roof water blasting booked for that day, or anyone who heard something “through the grapevine”, can help identify the contractors.

“Everyone makes mistakes. We’ve stopped being angry. We just wanted to finished getting this sorted out so we can carry on with our lives.”

She said the months since had been very stressful from “all this and losing everything and the burglaries and the insurance hassles”.

“Nobody died, but it’s made me sick, not eating and sleeping properly.”

The asbestos was “a particularly nasty type” and the couple would like to give the contractors information about it, she said. They were concerned about the fate of the burglars.